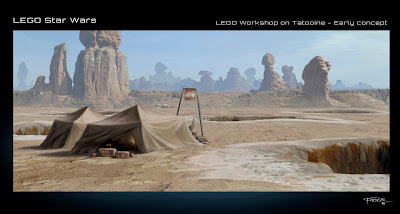 Right from the first meeting I attended at Lucas in 1998 it was clear that LEGO would get a different role than the other partners Lucas had earlier worked with. LEGO would actually give kids and adults the power to change the vehicles and the story. The creative possibilities that LEGO gave to the Star Wars universe would be a great new communication platform.
As a first concept idea I did this sketch of a LEGO tent workshop with a rusty LEGO sign placed on Tatooine where everybody could come and get their vehicle build, rebuild or customised. The idea was that the brick was a new interpretation of the Force. A force of creativity. So if you wanted 8 engines on your X-wing, now it was possible.
Posted by Faber at 4:36 AM