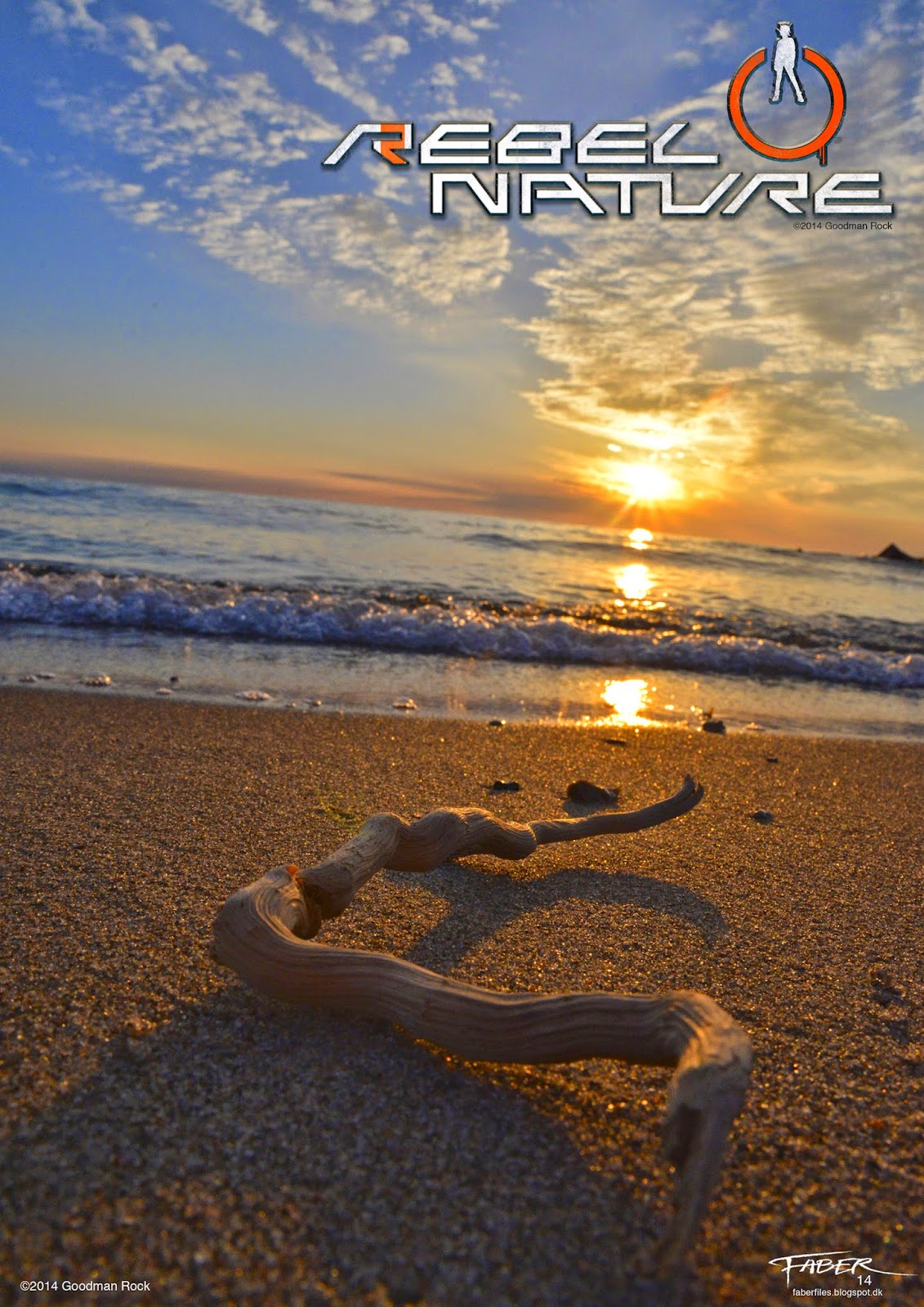 Wish it was only wood that drifted around with the ocean currents.
Get ready for Rebel Nature

The origin of Rebel Nature 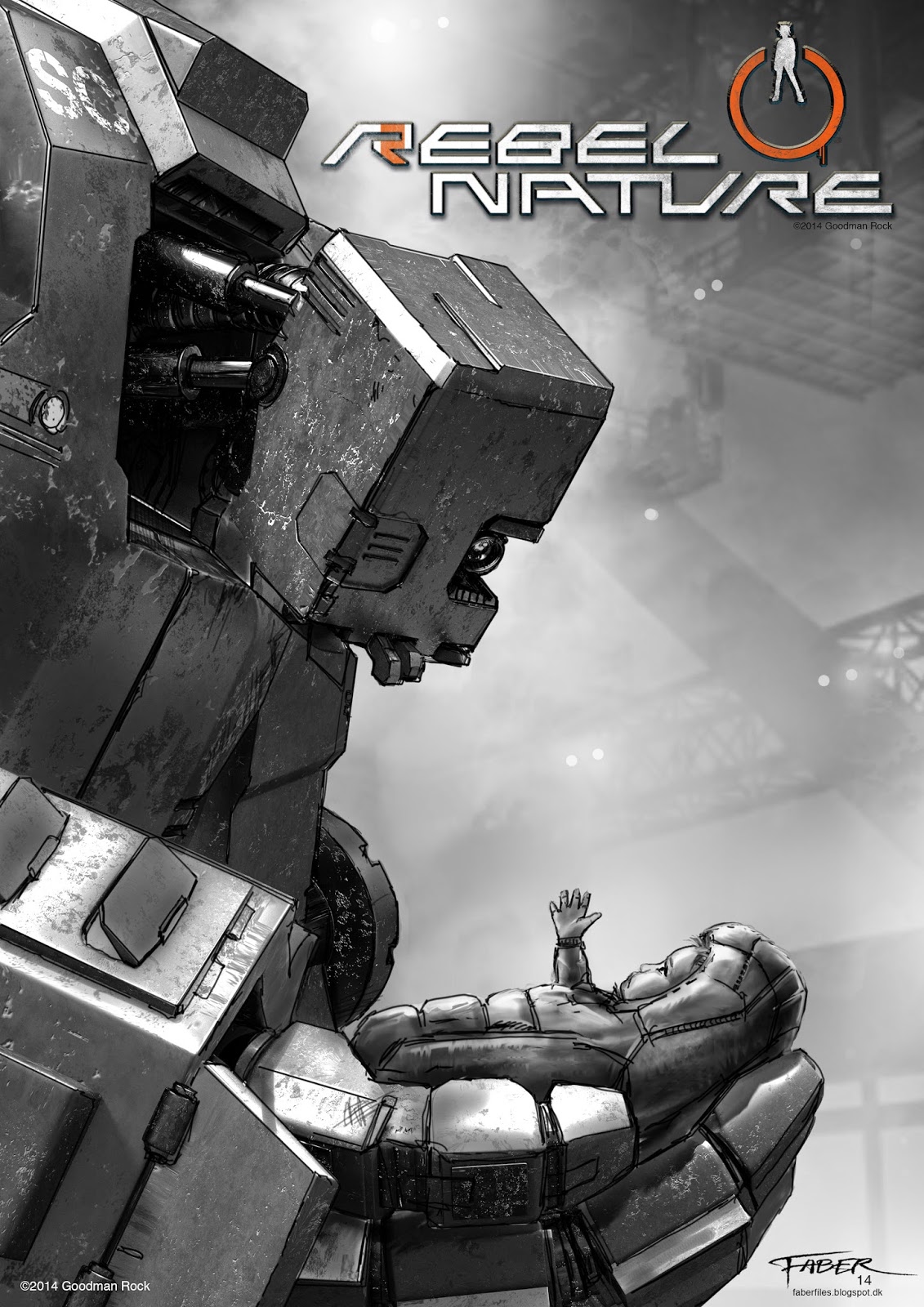 Having worked with LEGO for more than 25 years and robotic characters for more than 16 years it is clear that I am deeply fascinated by 2 mayor themes namely (kids) imagination, robots and the future of both. The last ingredient for Rebel Nature hit me like a hammer 9 years ago when I got my first child. Suddenly the future meant something else. The responsibility for a small individual but also for the future of our civilization and the nature that surrounds us became very real and so did the drive to do something differently.

I remember feeling a bit like a robot that suddenly held a new organic life form in shape of a child, in his hands and now had to learn what real life was about starting from scratch. Looking into the eyes of this fantastic new being meant that everything I did had a specific purpose.
Awakening to the ever-present responsibility of taking care of a baby apparently tricked some creative thoughts as a side effect. I had this crazy picture in my head of a small baby crawling happily and unknowing on the steel structure of an oilrig in the middle of an ocean. It was an extreme contrast and I started to fantasize about what it would take for a kid to survive in that hostile environment. What if there was no one else around, only machines.


Suddenly a lot of ideas hit each other in one point. Robots and their future role, children and their future, the impact we have on the environment, the future of consumption and an idealistic urge to do something beyond earning money. The result is finally ready to be realized in the shape of Rebel Nature.
Posted by Faber at 1:57 PM 4 comments:

Summer has suddenly hit Denmark so this shot is to celebrate. It is taken a few years ago and shows my oldest daughter going her own way in the countryside (the dot to the right is actually a bumblebee in flight:) 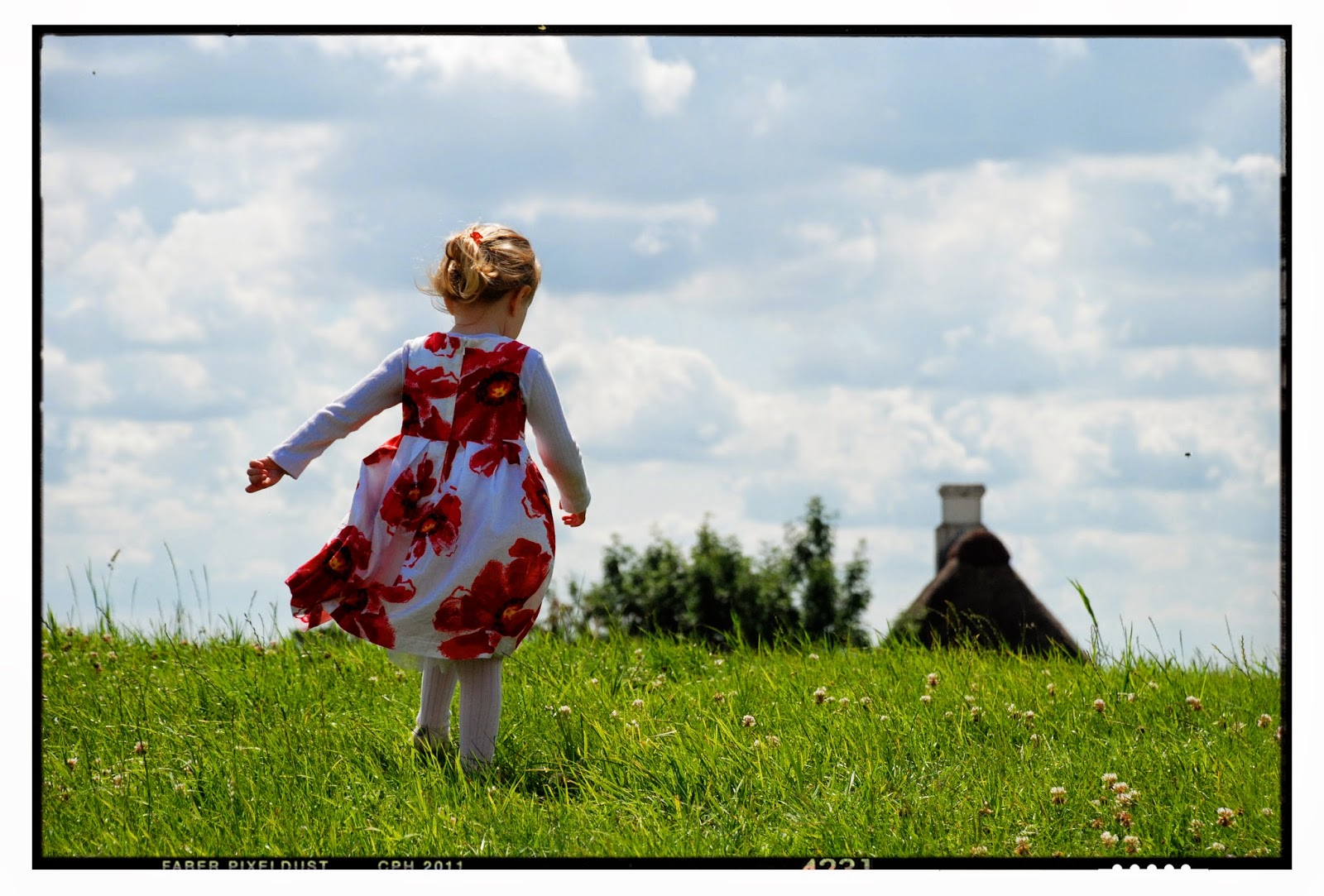 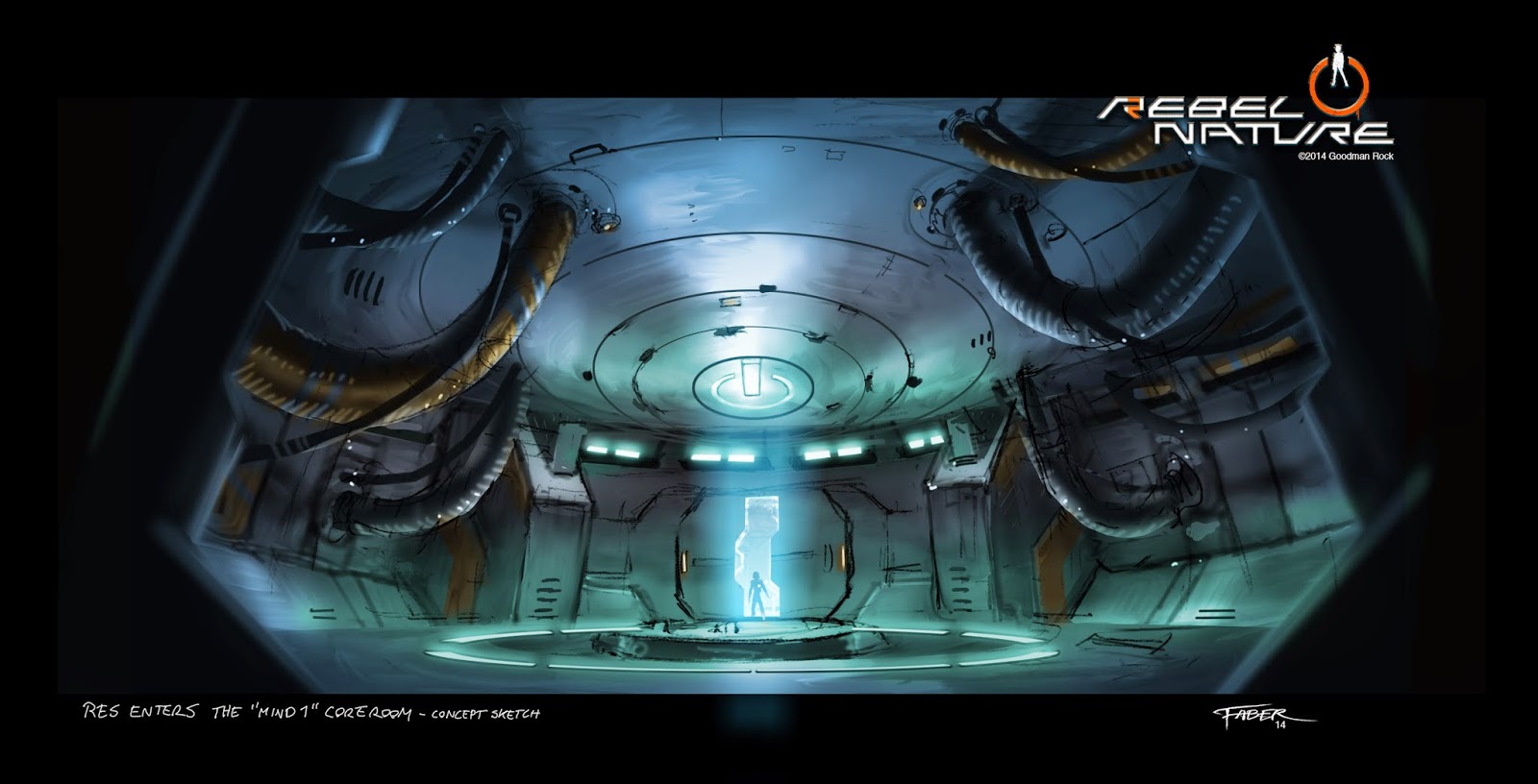 Here is a fresh concept sketch of the key scene where Res enters the core room of Mind1 inside RIG21
Posted by Faber at 2:38 AM 6 comments: 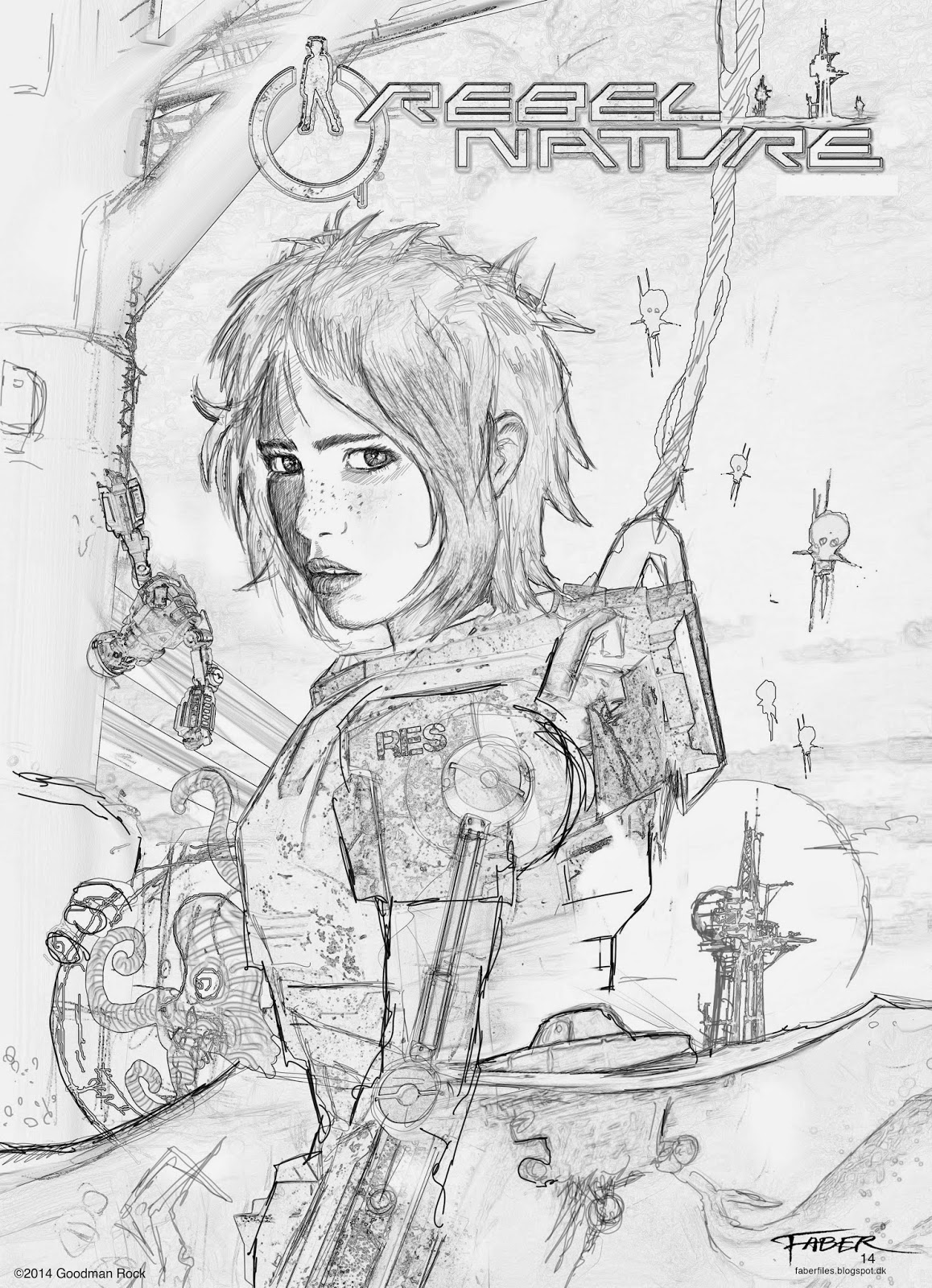 Thought I'd let you in on some sketch work for Rebel Nature. I've played around with the different elements of the story and this seems to work so now it is just to add some color. I will upload a rough when I get a little further. I know you don’t know the story yet but does this wake your appetite? Any comments?, I would love to hear but I won’t promise to follow themJ
Posted by Faber at 3:42 PM 8 comments:

Nature is a rebel 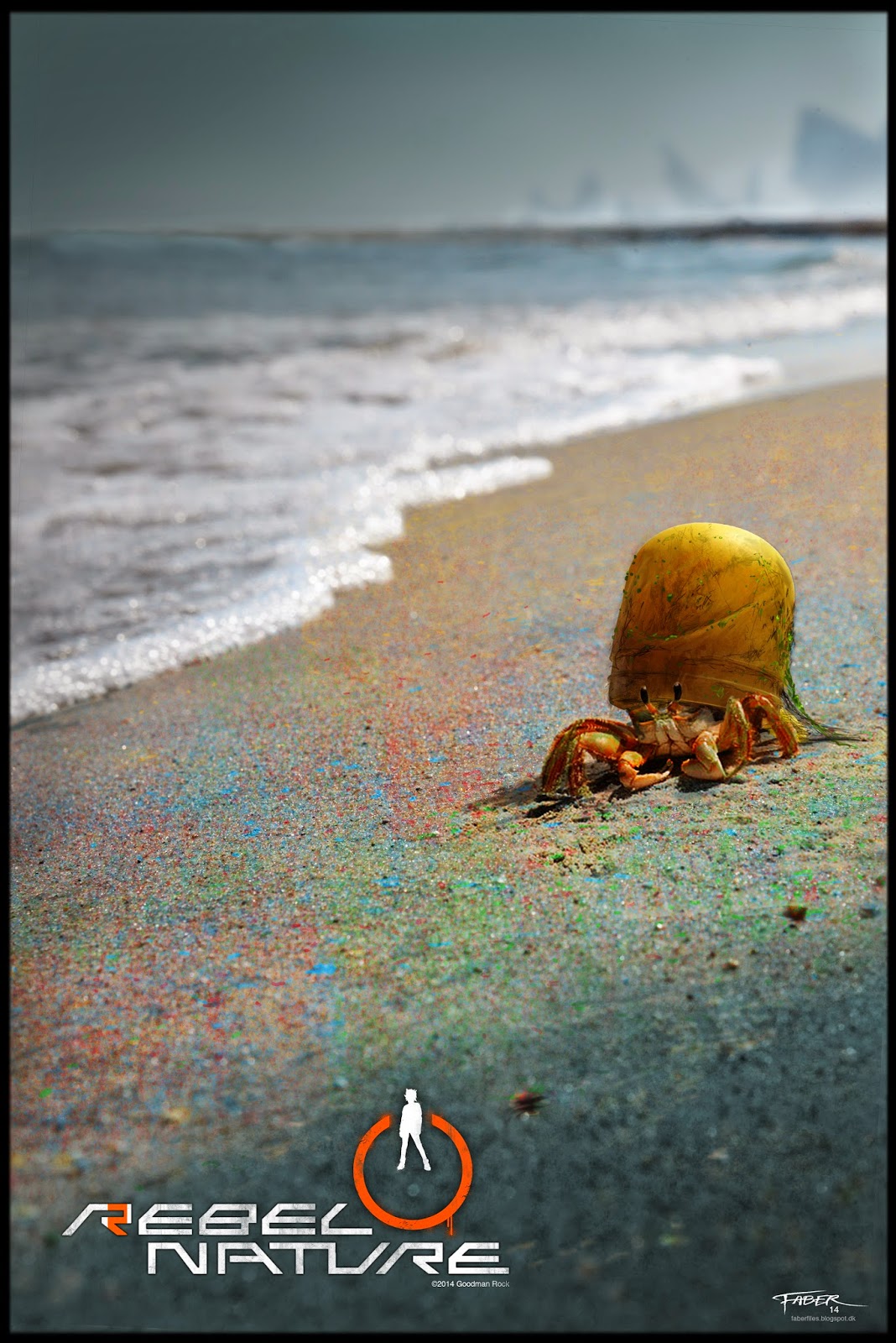 It is all about balance 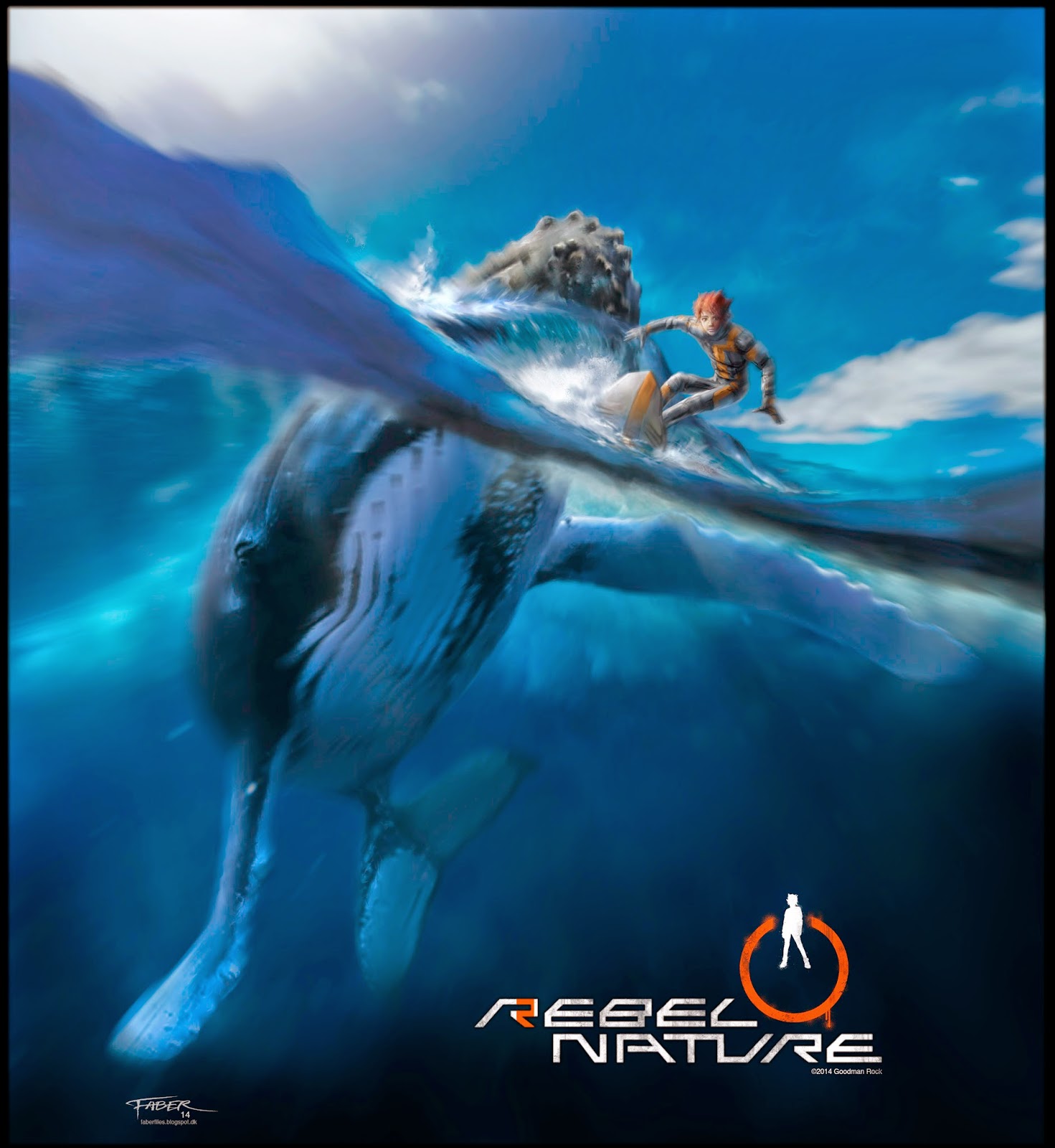 What is Rebel Nature?

“Rebel Nature” is a powerful and intriguing story with direct reference to our current environmental situation on planet earth and especially in our oceans. The story gets its basic fuel from the conflict between longtime balanced natural evolution and speeded technological human progress.

The aim is to create the first girl "Eco" superhero who acts on new and emphatic morals and ethics of the 21st century instead of the values of post 2WW that most other super-heroes pursue. The moral of Rebel Nature is “balance and evolution” instead of “victory” understanding that good and evil is relative sizes and that winning is not the goal.
Rebel Nature explore the idea that evolution is a reaction to what actually happens on the planet. If humans create an impact, evolution will react. Not based on any moral but just based on biology and survival of the fittest. The only fantasy ingredient added in Rebel Nature is that nature has started speeding up evolution driven by the inclusion of plastic in the food chain and plastic is for sure something that nature has not created.

The lead character of Rebel Nature is a young girl called Res Waveborn and she is a very different superhero with an unusual childhood that sets her apart from every other human on earth. Res’ childhood teaches her to act when everybody else adapts and teaches her to pursue balance instead of victory in the conflicts she encounters. She will travel through this strange and yet familiar world and act as our guide as she tries to understand her past, present and future.

Rebel Nature is a personal story and journey of a girl who grows up in the most unusual of all places with the most unusual foster parent. Her personal goal is to find the truth about her parents herself and their idealistic project. Her superhero goal becomes to unify humans with their own robotic creations and seek a new balance and understanding with nature. It is about time because nature is radically changing to answer the human effect.

Rebel Nature doesn’t try to moralize. It delivers great action, big emotions mind-blowing locations and a peek into a possible near future.

How are we going to tell the story? well since this is a self financed project until now. I can't tell the exact plan but it will grow organically with bits of story and information coming out in different media.
These websites will surely play a big role and the first active piece of content that we are working on is an app game that tells a small part of the story to test the concept and wake the interest. The concept work creating this app gives us a lot of material we can use to move into "movie mode". I'm working with my long time friends and super crew at Ghost VFX Copenhagen to bring this to life and we are very ambitious so lets see... This is just the beginning.
Posted by Faber at 3:07 PM 11 comments: