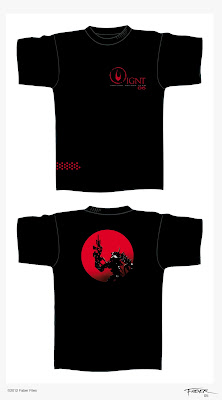 Through the years we at ADVANCE have done several exclusive crew t-shirts for the production team and here is one of them from 2006 when the Ignition trilogy kicked off.

Back in 2006 the story of Bionicle took a mayor shift. We needed some fresh adventure so the Toa were sent on the Ignition trilogy to ignite the legend.
We also needed to refresh the campaign and the look and feel. The Piraka were cast as “the gang on the loose” and the style was urban and graffiti inspired. To really make a change we set the scene in a strange surreal stronghold that was quite modern with clear references to human technology but with a twist. This was steam punk meets Bionicle and the Piraka had their own rodeo bull, an industrial robot for getting dressed and a sliding gun rag. A beat up sofa and TV set and small tech creatures running around including a fly and a camera. Here you see some of the first sketches and 3D models of the Piraka location. 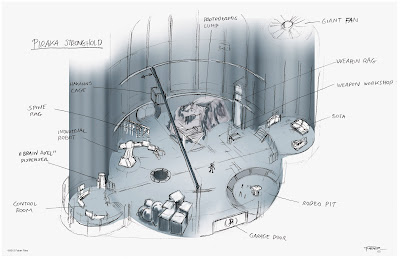 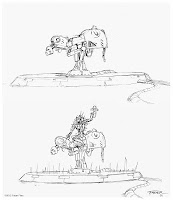 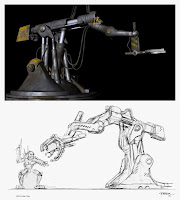 I directed the music video style commercial about the gang of Piraka in their hangout and we even did a Piraka rap to take the campaign totally out of the epic story mode and into the street. Some loved it and some hated it but it defenitely was something different.

These are very exciting times


Dear all who are visiting this blog. I want to say that the interest is very inspiring and that this indeed is very exciting times.
I am definitely no running out of Bionicle “behind the scenes” material. It is more a question of getting the time to do the posts. I’m busy doing future projects.

First and foremost it is amazing and great to see how well (and deserved) LEGO is doing all over the world and that I’m extremely proud to be part of the team helping LEGO to reach it’s full potential. We have helped LEGO with the launch of LEGO Friends and this is going to change the girl’s connection with the greatest toy in the world for decades to come. Go girls and get creative!!!
http://www.bloomberg.com/video/lego-ceo-says-growth-in-sales-to-girls-is-global-meWsXbYHRHGBJKHTIUoYzA.html

We are currently working on several fantastic projects with LEGO. Some of them would make fantastic news on this blog… but my lips are sealed. Meanwhile here you can see a little teaser.
http://www.youtube.com/watch?v=PRSOAcIbo_0&feature=g-all-u

I am also working on my own film/story project and you will all hear much more about this soon. I can only say that it is a project I am doing in close collaboration with my old friends at Ghost VFX. This is going to ROCK.