Karda Nui. The heart of the legend 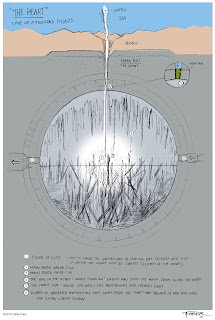 The Ignition trilogy that started out in 2006 on Voya Nui and continued in 2007 in Mahri Nui was ending up with the grand finale in 2008 at the heart of the legend inside the heart of Mata Nui. This is an early sketch of the concept for 2008. The heart had been blown open eons ago when the giant collapsed and had slowly been filled with saltwater. The incoming water had mixed with protodermis and in 2008 the fluid level had reached half full. This placed the ignition core (the Codrex) right at the centre where it had to be to restart the giant. The missing part of the heart that was blown out and became the island Voya Nui now returned and sealed the heart for the restart. With the heroes inside the stage was set for the final battle between Makuta and the Toa.
Posted by Faber at 3:11 PM