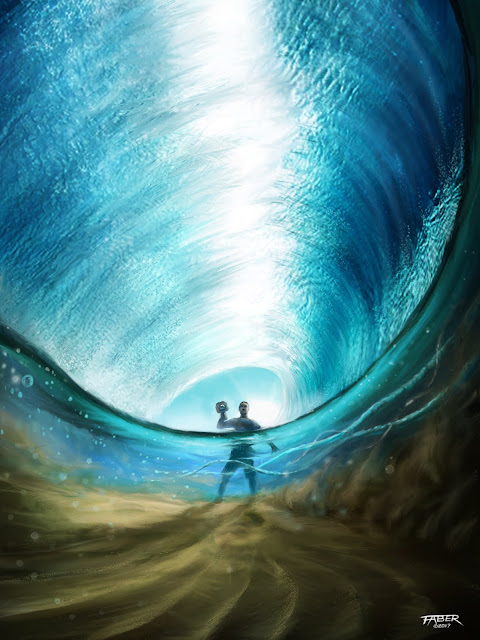 The Hawaiian photographer Clark Little is daily posting the most fantastic and inspiring photos from inside the waves and waters of Hawaii.
https://clarklittlephotography.com
To celebrate his great work I wanted to try to do the impossible shot as a drawing where you are both inside and above water with the photographer in the eye of the action. Right where the water meets the air is the spot where Clark catches his amazing pictures and with risk and great skill he really brings out the pure magic of moving water.

The water surrounding Denmark is quite a bit colder but we all know that all water on the planet somehow is connected and what we do here will have affect in far away places. Water should be treated with the respect that it deserves since it is the only single thing that makes this planet different from any other dust ball floating around in space.
Thanks Clark for getting into the eye of the action and getting all those impossible shots.
Posted by Faber at 2:48 AM 1 comment:

The INKredible Adventures of Drawboy #26 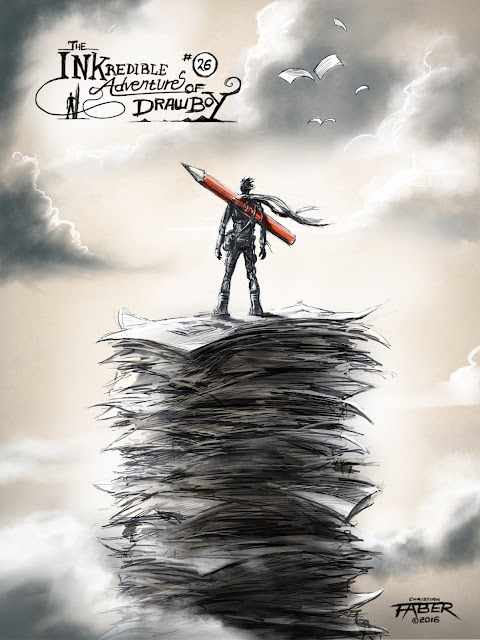 "You are what you draw and each drawing is an image of you".
DrawBoy is originally a title I gave myself when people asked what my job was at the advertising agency I used to work at. The name kind of grew on me because it describes the craft of drawing in it's purest form. This was and is the craft I love and it is my favourite meditation and expression.
So DrawBoy is my superhero and alter ego. He tries to catch as many impressions as possible, stack them in his memory and merge them into visuals and concepts. It all starts with the simple pencil and the white surface of the paper or whatever media you choose.
"So go chase those images and make them your own. Consuming and creating images are the most sustainable type of consumption you can imagine"
Posted by Faber at 1:51 PM No comments: 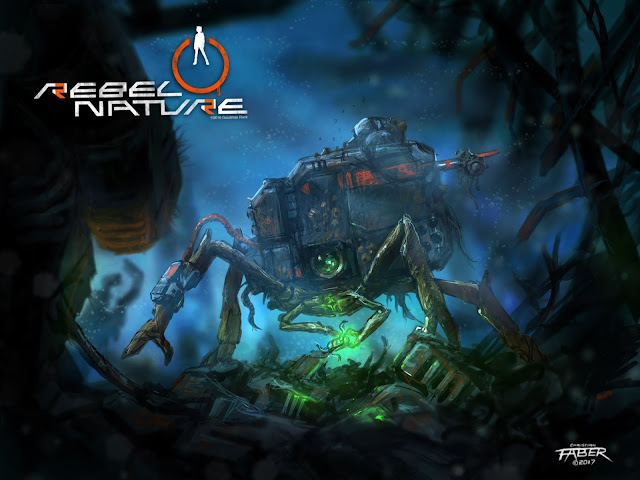 Deep beneath the waves of the ocean and Rig21, this strange creature scavenge for spareparts and energy. It is a mix of organic life and robot technology. The head of a deepsea robot reused by a mutated crab. In nature everything is reused, even the thrashed and replaced technology.

On May 17, 1993. 24 years ago, something epic and magic happened on my musical world map. For many years I had been into jazz, funk and soul and I had been chasing rare vinyl albums in strange record stores since my early teens. Suddenly this album "Emergency on planet Earth" landed on my turntable and a lot of dots connected. Suddenly the music I loved for it's groovy ear catching quality carried a message of purpose. Not just the usual text subjects but danceable music that actually at the same time made you think. In the middle of this small revolution (in my book) stood the amazing Jay Kay who in some way managed to merge funk with a purpose. He displayed the coolest style in a mix of sporty, hippie and funky, and he could dance like never seen before. I was blown away and many years later when I first sketched the idea to my story universe Rebel Nature, it was actually to the sound of Jamiroquai.
Jamiroquai and Jay Kay represents the perfect picture of the situation our civilisation is facing right now. They amplify the knowledge about our planet and environment and the epic challenges we face yet at the same time they have a party and dance the worries away. Living the dream with fast cars, private jets and models in bikinis.
When raising kids they do what you do, not what you say, so in this case we tent to hear the music, have the party, dream about the star life and then forget the purpose.

If this post ever reached Jay Kay, I would beg Jamiroquai to reissue "Emergency on planet Earth" in a 2017 version or 2018 making it a 25 years anniversary, and have Jay Kay drive a electric supercar.

Here is a link for the video that is still depressingly relevant here in 2017.
Jamiroquai/Emergency on Planet Earth(1993)