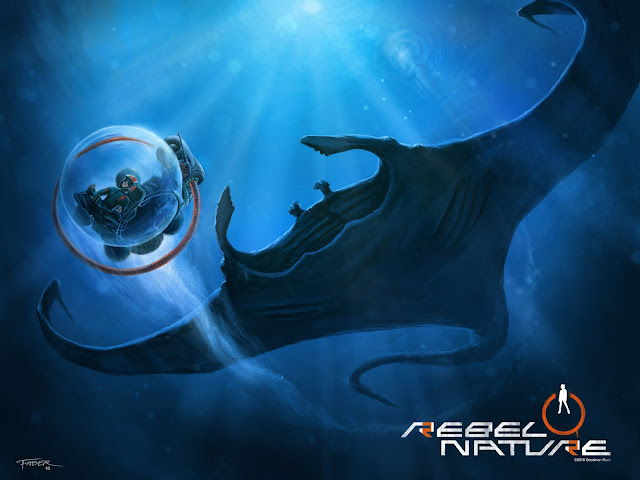 Concept drawing of Res Waveborn diving into danger in a new type of innovative all-terrain vehicle. It works as well above water as below and is build out of spare parts from a research sub and a jet plane plus a new experimental dark-matter engine. The pilot sits on a free floating seat moving inside the sphere.
This is the danger zone and right behind the tiny craft a giant mutated ray hunts the prey. The lifeforms underwater has totally changed and this is just below the surface. Imagine what awaits deeper down. #RebelNature and #ResWaveborn will travel sea, air and land when the universe unfolds:)
Posted by Faber at 4:08 AM 1 comment: 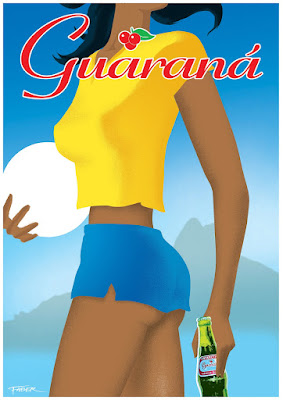 Back in 2003 after coming home from 10 days vacation in RIO to the cold winter in Copenhagen, I was desperately seeking the iconic softdrink that is an important part of everyday life on the beach.

At that time Guarana was not imported to Denmark but by strange coincidence I met the guy who was planing to independently import the brand. I spottet a logo streamer in the back of his car and stopped him to ask if he knew about the brand in DK. I ended up helping him make a small campaign for the launch in DK. I did some posters and postcards, got them printet and delivered them to the bars and cafe's around Copenhagen. It never went as big as it was/is in Brazil but you can still get the brand in Denmark and soon all eyes will be on Rio so here is a little taste. 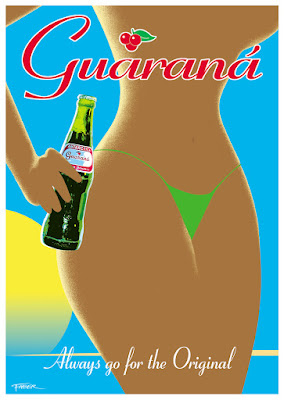 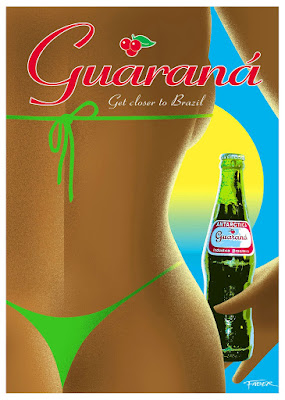 I have been preparing for this all my life. I had no idea this was where it was all going. Everything I did, every move I made was always leading to this. The switch is in place. Inside Mind One’s protective shield like my father designed it. It will make the entire rig sink into the ocean. We need to get out before that happens. 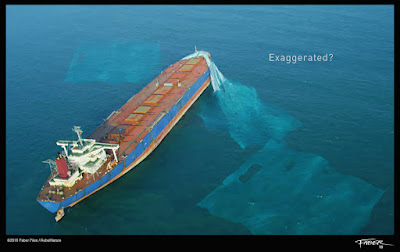 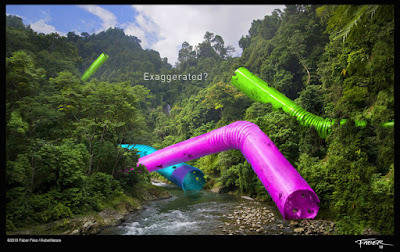 #RebelNature is all about using story and visuals to make change in our approach to consumption and environment. Plastic in nature is a big issue but often it is covered by waves and foliage so here are 3 visuals where the problem is difficult to overlook.
Please use, share and spread these posters if you agree that we and the coming generations have a giant issue right outside our door. Try to consider if you really need that plastic bag or that plastic lid for your coffee to go. 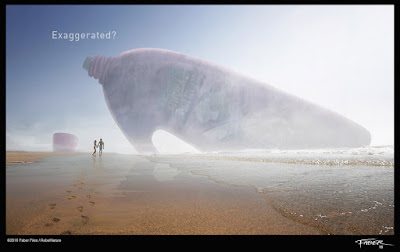 4 faces from the past

Cleaning up some old files these 4 faces suddenly stared at me from a distant past (1998)
This is the original illustrations that went on the faceplates of 4 of the Slizer/Throwbots. It was important to make the face asymmetrical and chaotic with reference to the different environments to give them a unique personal look. #Slizer #Throwbots
Posted by Faber at 2:09 AM 5 comments: 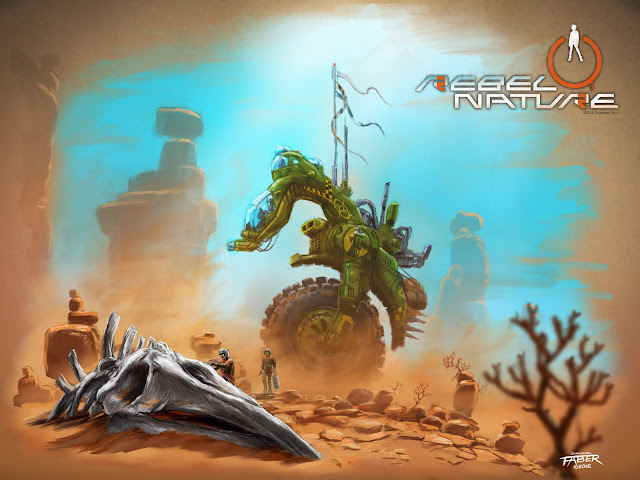 The #RebelNature universe and story is expanding. Here is a concept drawing of scientists taking samples of a whale skeleton in the Coral desert. They are riding an AT uni wheel gyroscooter.
Posted by Faber at 2:41 AM 1 comment:

What you don't see will hurt you... 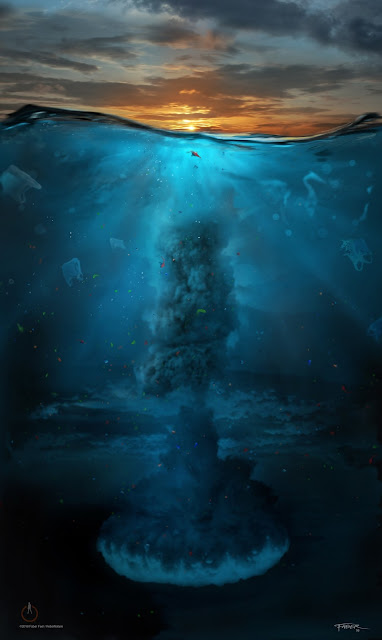 I apologise for this sinister image but it is an image that has grown in my mind and I had to try to create it.
If you see it upside down you might recognise an old black/white picture from 1945.

I fear that the plastic pollution of the oceans is to resemble with a slow detonating bomb of unknown magnitude and effect. The bomb has exploded but the effect is longterm and probably won't effect me and if I'm lucky not my kids but then what.
We are going to be measured very hard by future generations if we don't act knowing what is wrong. So like smoking some years ago was considered a human right and now is strictly regulated. Our use and attitude to plastic has to change dramatically. Plastic is oil and it has to be contained. If a supertanker spills oil in the ocean it becomes a giant press story but the 8 million ton of plastic that is estimated to be spilled in the ocean each year all over the world goes invisible.
It ought to be a human duty to collect plastic everywhere we see it and not a human right to throw it away. If we don't start acting biology will change and nature will rebel. RebelNature is an adventure but it has a very important inspiration.

A quick flashback to 3 years ago when we worked hard on creating the world behind Hero Factory episode 11 "Invasion from below".

Much has been said about Hero Factory and episode 11. But given all the compromises and budget issues, voice talent that wasn't available... - bottom line I think this episode produced entirely by Ghost and Advance, actually turned out very adventurous and actionpacked.
It was definitely ment to be continued because Heroes do not leave a half done mission. But HF was abandoned and the rest is history.
A fun fact behind episode 11 is that it is seen more than 5 million times on different Youtube profiles.
Posted by Faber at 7:17 AM 5 comments: